Handaberd Monastery is located in Verin Khachen region of Artsakh (New Shahumyan region of Artsakh Republic, presently under the Azerbaijani occupation), on the high edge of the wooded slope of the mountain range in the southeastern bank of the Levonaget River. The monastery is located not far from Handaberd – the biggest and strongest fortress of the region. The fortress lacks any religious buildings and it is probable that the monastery served the religious needs of the inhabitants of the fortress. According to one of the inscriptions, the main part of the buildings was built by Archimandrite David in 1276 around the older church on the site (Fig. 1). In the second half of the 13th century, during the Mongol dominion the foundation of a monastic complex was often laid by the clergymen themselves using their finance and even physical efforts. Thence, the architectural solutions and decorations are comparatively modest. These simple and plain buildings are on the one hand witnesses of the political, economic, cultural comedown and on the other hand a peculiar source to find out how the culture of the period voiced and tried to adapt to new hard conditions keeping the main elements of national identity. Fig. 1 View of the monstry from the west, photo by Artsakh Archaeological Expedition.

The main period of the operation of Handaberd Monastery goes back to the second half of the 13th century and to the 14th century. It was the period of the cruel Mongol dominion. The Mongol hordes not only invaded, plundered ruined the country and massacred the people but also made the armed forces of the conquered countries take part in their future invasions. The only intention of the period under these circumstances became struggle and survival, the only form of welfare was military service in the Mongol army. To fight for motherland’s sake in the Mongol army and to die in far-off countries – this was the fate of brave representatives of almost all noble families of Eastern Armenia. The cavalry was the main force of the period, the guarantee of the stability of the patrimonial possession and the existence of the Church. As it appeared after thorough investigations of the written sources, the Dopyan kin of Verin Khachen where Handaberd Monastery is located was one of the most famous followers of this way of life. Under these circumstances the main task of culture was to adapt to the changing conditions but keep Armenian identity, a mission which is best observed in Handaberd Monastery.

The territory of the monastery was prepared beforehand; terraces were built from the south-east to the north-west on which buildings were erected. At present, the monastic complex consists of two groups of buildings (Fig. 2), the main one of which presents a cathedral with gavit, two chapels, a belfry in its west and a graveyard (Fig. 3).

Fig. 2 Plan of the main buildings of the monastery, photo by Artsakh Archaeological Expedition.

About 10 m from the main group there is the second group of the northern chapel. The architectural investigation of the complex enables us to reconstruct the whole duration of the building process of the monastery which was founded on the place of a more ancient church gradually adding the above-mentioned buildings (Fig. 4). Fig. 5 View of the main church from the west, photo by Artsakh Archaeological Expedition. 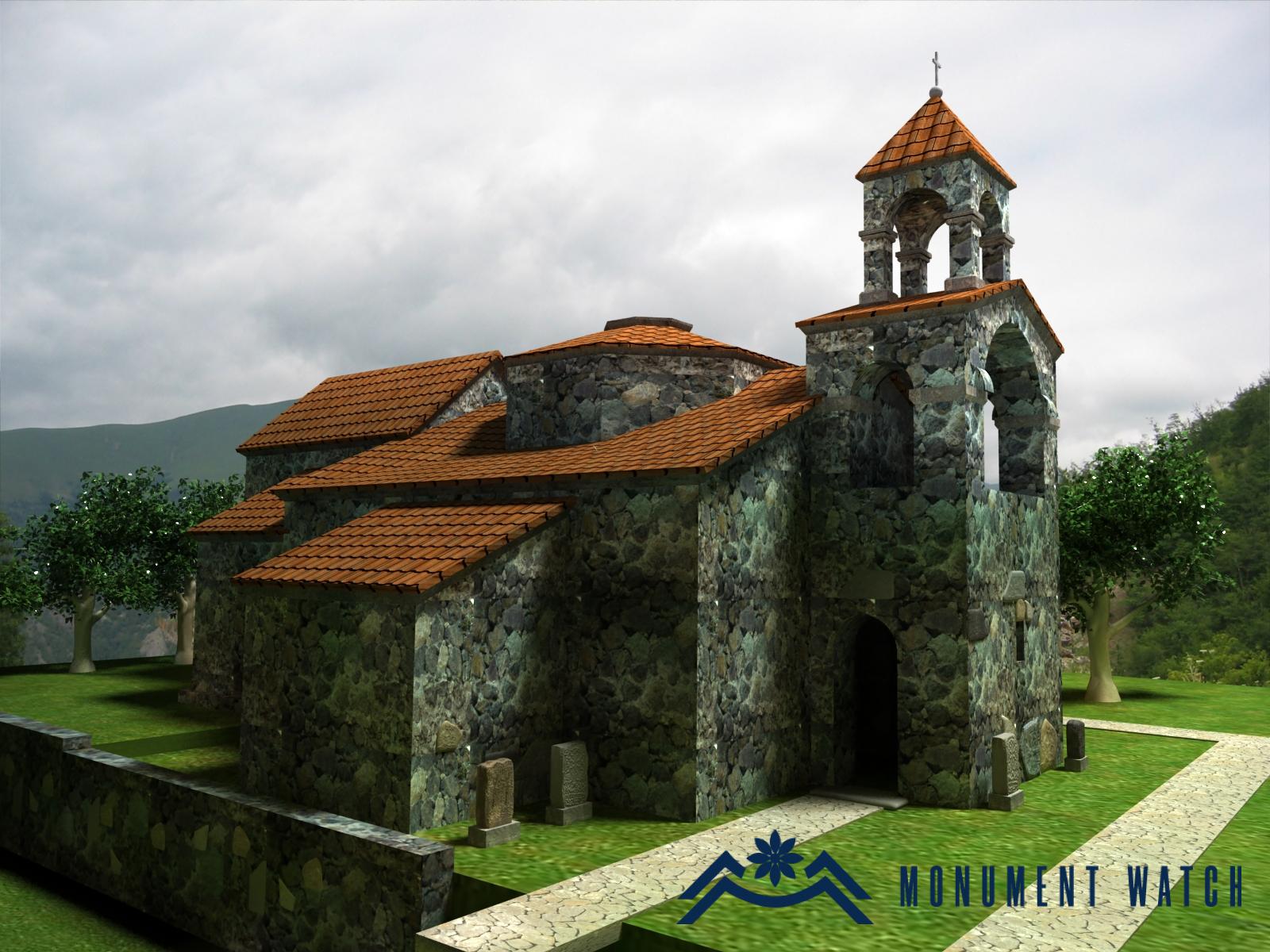 The cathedral and the chapels have one-nave vaulted roofs (Fig. 5), a construction which was widespread in the monastic complexes of Artsakh in the 12th – 13th centuries and are important characteristics of the Artsakh architectural school. Other characteristics of the Artsakh architectural school is the existence of the rectangular chamber observed in the cathedral and churches. The cathedral and churches of Handaberd Monastery also have rectangular chambers and a hall with a common vault.

The chapel-porch and especially its roof have an interesting construction. It repeats the forms of the colonless porches which are planned as an irregular square with interesting arches supporting the roof. The square under the dome is turned into an octagon by means of arches built in the corners. This octagon supports the false dome with a window (so-called yerdik) in its centre. The construction of such a roof is originated from the dwellings with roofs called hazarashen which gave unity and extensity to the inner part of the dwelling.

The belfry of Handaberd Monastery is rectangular in plan and refers to tower-shaped belfries in which the function of a belfry and a porch is combined.

The northern chapel of Handaberd standing afar is distinguished by its single planning and spatial construction (Fig. 6).  It is cross-planned inwardly though externally it is rectangular and lacks a dome. The type of the construction of a cross in the rectangular in small churches is always supposed to have a dome. But there is not a dome here. With its three chambered, vaulted construction and reused cross-stones with figurative reliefs it is single in the whole of the architecture of the Middle Ages.

The monastery is built of unpolished or badly polished split stones, lime mortar, uneven, mixed masonry. The material used here is mostly grayish local stones. In different parts of the complex of the walls cross-stones are used, they served as a building material as well as some device of an artistic element. The roof of the complex is tiled. Thousands of pieces of tiles were gathered from the whole territory of Handaberd Monastery. Among these tiles are some bearing inscriptions in Armenian. To save all buildings of the monastery from further damage and destruction the walls were reinforced and partly reconstructed.

The excavations of the monastery complex were held in 2004-2005 and were carried out by the Artsakh expedition of Academy of Science of RA. Owing to the excavations, the ruins of the complex were cleared from the plants ground during the centuries as well as the mighty layer of earth and stones caused by the landslide and the most important architectural details were fixed which enables us to partly reconstruct and strengthen the buildings.

The majority of cross-stones of Handaberd in size and in composition are represented by ordinary samples. They are characterized by low technical implementation and simple compositional solutions.

These cross-stones are divided into several chronological groups. In the cross-stones of the early period dating to the 10th – 11th centuries besides a cross there are also other decorative elements e.g. from the upper corner towards the cross are clusters of grapes, on both sides of the lower  part of the wings of the cross are simple rosettes, etc.

Next chronological groups of cross-stones are of the 12th – 13th centuries. They are represented by a number of types according to the decorative solution including several single examples of the cross-stone culture.

Comparatively early examples represent several cross-stones with elongated proportions, whose decor is introduced by a cross based on apple-rosettes; a decor which was obviously taken from a jewellery prototype.

But the masterpiece of cross-stone art both of Artsakh and particularly of Handaberd is of the second half of the 12th century and the 13th century. Three cross-stones made of hard basalt (Fig. 7) are distinguished in this group as they have carved portraits on them.  The two of them depict scenes of battle and feast. One of them shows a riding warrior in the full armour with a glass of wine in his hand (Fig. 8). There was a special attitude towards a soldier fighting for his country and this carving appears to show this attitude.  A single composition of Handaberd cross-stone art is a carved portrait of a mother fading a baby at the breast (Fig. 9). Fig. 9 Relief on a khachkar, 1194, photo by Artsakh Archaeological Expedition.

The last group of Handaberd cross-stones and cross-carved plates dates back to the end of the 13th and the beginning of the 14th centuries. This group is remarkable for a number of cross-stones bearing traces of sketches of the future composition on them. A single discovery is a small piece of plate made of marble with a lined cross and an inscription of 1276.

A number of gravestones were documented on the territory of Handaberd Monastery. Among these gravestones the flat one with the name of Catholicos of Albanian Church Ter Stepanos on it is distinguished. The Albanian Church in the 12th-14th centuries had been functioning in the Arstakh and Utik provinces and united the Armenian people of those regions.

Of great interest are more than 20 inscriptions the majority of which were discovered during excavations.

Unmentioned in the medieval written sources in this and in the similar monasteries these inscriptions become the only written sources of the real economic, cultural and juridical life of the monastery. These are inscriptions about building, settlement, remembrance and their investigations will enable us to clear up some details of the economical and juridical life of the monastery, enlarge the toponimical system of the region. In case of Handaberd Monastery Armenian inscriptions on the tales (Fig. 10) and on the fragments of pottery are of particular importance as they prone the widespread usage of the Armenian language on the pure economic matters which is in its turn the highest indices of ethnology. The excavations gave a number of items in metal and clay which greatly enrich our knowledge of the material culture of Artsakh. During the excavations of the Cathedral a baptismal basin was unearthed with an inscription on it. Among metal works different items can be distinguished: a key, a clasp, a horse-shoe and various items of the blacksmith production such as an axe, a pick, a knife. The handle of a cross and a bronze bell are associated with religious rites. Among pottery large pots so-called ‘karases’, pieces of kitchen pots and bowls were found.