It is located in Hadrut region of the Artsakh Republic, on the top of Toghasar mountain, at the back of Togh village, in the territory of Ktish fortress (Fig. 1). As a result of the 2020 war, Hadrut region is occupied by Azerbaijan. Historians Movses Kaghankatvatsi and Tovma Artsruni provide information about Ktish Fortress. They are related with the anti-Arab struggle organized in southern Artsakh in the 9th century, led by the prince of Dizak Yesayi Abu Muse. In 853, the Arab army led by General Bugha besieged Ktish Fortress, where the population of the province was fortified: “․․․ almost nowhere, in the four corners of the world had any king seen such an army with a terrible appearance and armament, with a severe thunder and explosion, with the glitter of its weapons and which at that time the Arab army was armed, adorned and dressed․․․ And when the whole crowd of troops, more than 200.000, gathered in the same place, formed battlefields, shouted at each other to attack the enemy. And behold, Apumuse, who was known as the son of an elder, went to war against them, entered into a contest with them. They became like a big mound of iron or a diamond rock and mingling around, they clung to each other like one man. ․․․The enemy suffered great blows, as the straw is blown from the wind or the smoke from the storm․․․” (Artsruni 1978, 196).

This struggle lasted for about a year and in 28 battles Abu Muse won over Bugha.

The story of the construction of Tezh Church (Figs. 2, 3) also connects the legend with these events. Enraged by the defeats suffered by the Armenian troops, Bugha orders the destruction of the sanctuaries of Gtchavank at the foot of the fortress. At that time, Prince Yesayi orders his masons to build a new church on the top of the mount, towards Gtchavank, before the eyes of the enemy, within seven days, and since the construction of the sanctuary took place during the hot moments of the battle, it was called Tezh (in Arm.: “hot”) (Mkrtchyan 1985, 91). The church is a rectangular single-nave hall with a semicircular altar and twin window niches. It is 7.50 meters long, 4.50 meters wide, 3 meters high. It used to be vaulted and with a gable roof. It is built of untooled stone and lime mortar. It has two entrances, which open from the west (Figs. 4, 5) and south (Figs. 6), a small window on the western side (Fig. 7).

Tombstones have been preserved to the east of the church, on one of which M. Barkhudaryan read: “In the year of 1257. This is the grave of archimandrite Movses” (Barkhutaryants 1895, 56). A two-headed eagle and a paw holding it used to be depicted on the gravestone.

Summing up these data, it can be considered probable that the original structure of the church was not preserved, the present hall was built on the site in the 13th century, which also underwent changes in the 17th-18th centuries (frames of entrances, eastern window frame, crosses belong to the same period). 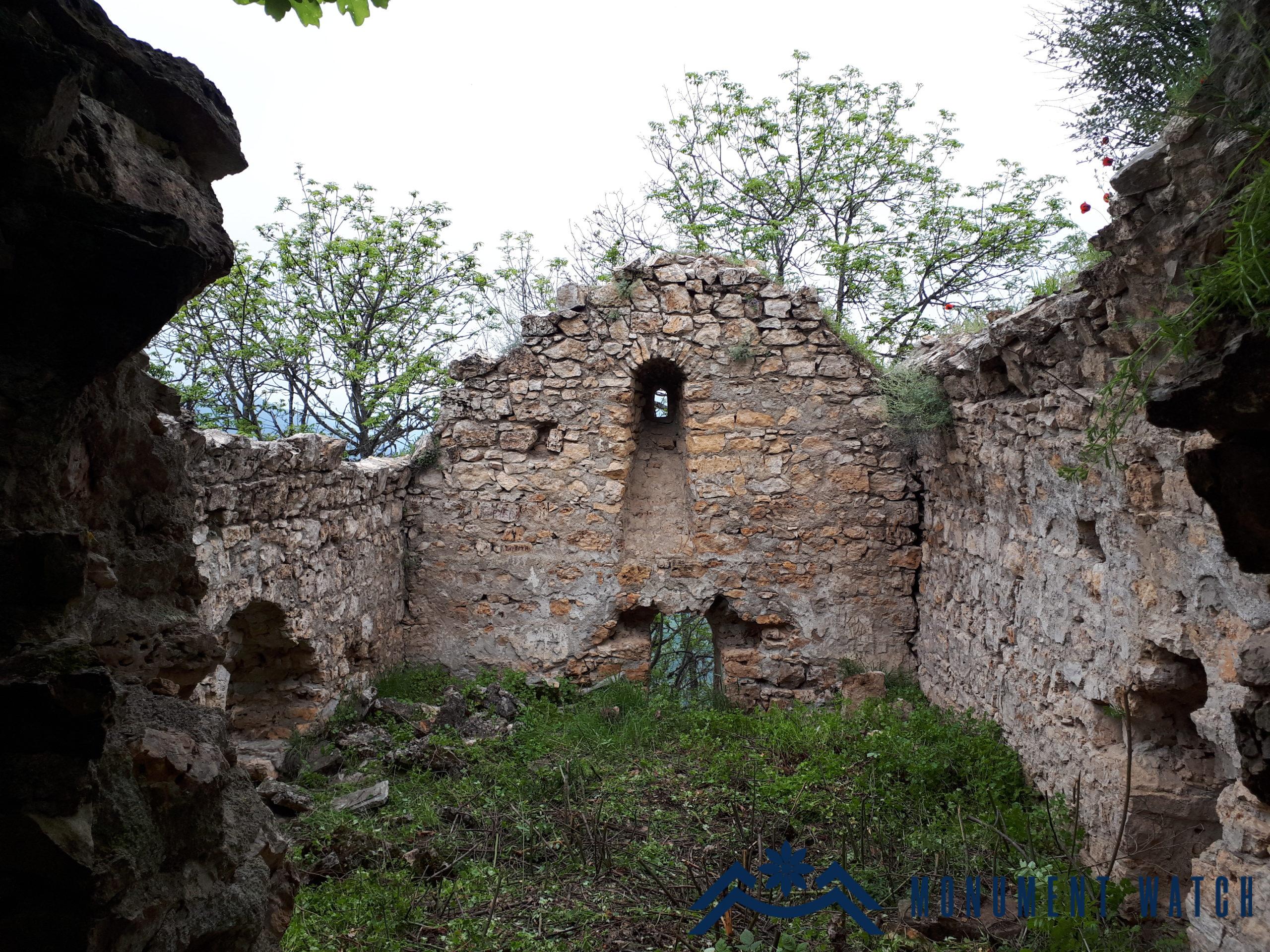 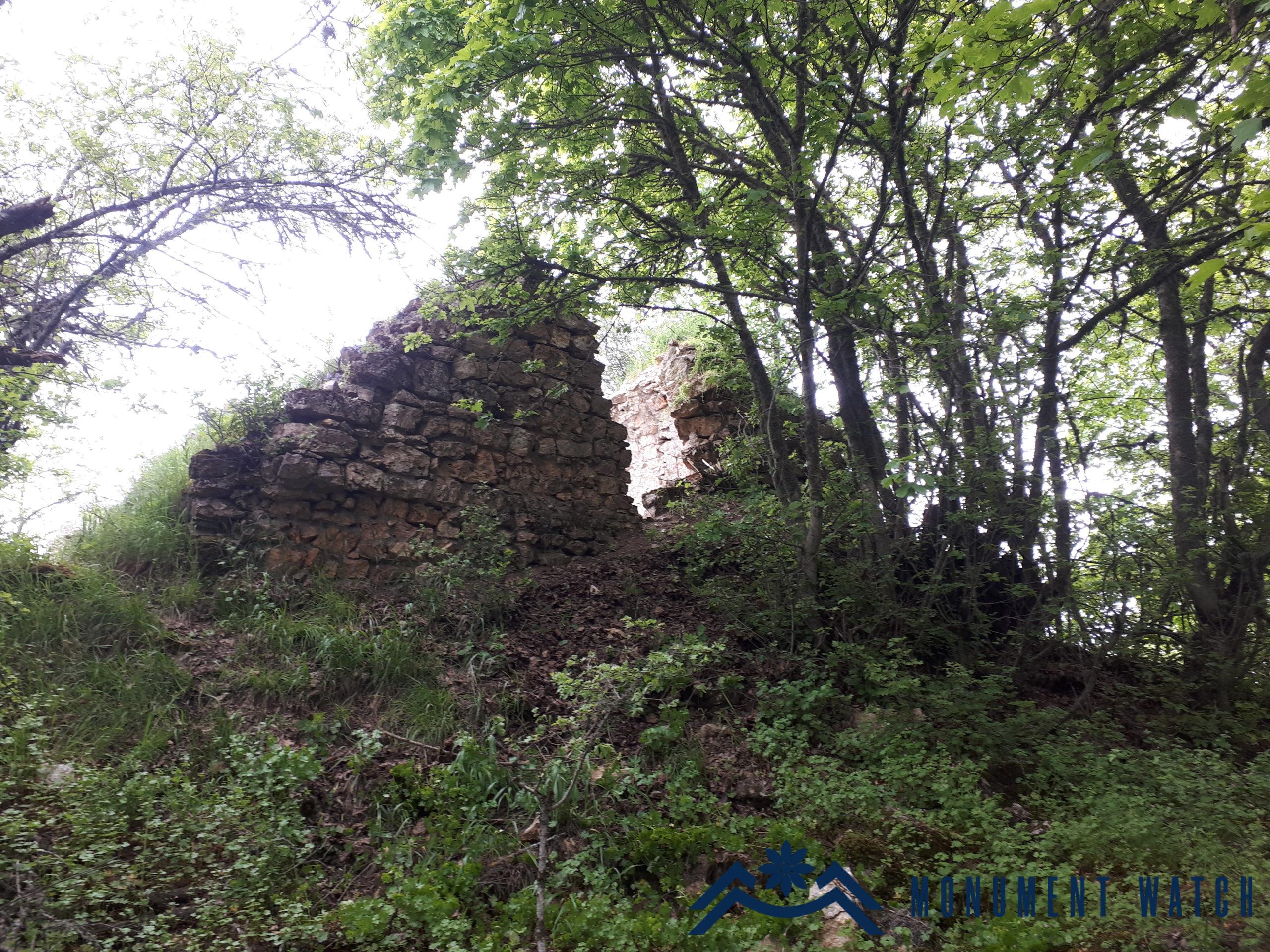 The walls of the church have been preserved, the vault (Fig. 8) and the central part of the eastern wall (Fig. 9) have completely collapsed. The church was not damaged during the hostilities of the Second Artsakh War, there is no information about the post-war condition.